How I started Quilting 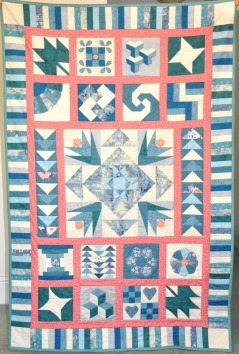 I joined Cambridge Quilters in the summer of 2018, having done dressmaking in my teens.  Being completely new to patchwork and quilting, I enrolled on a fortnightly course at Studio 39 in Baldock at the beginning of 2019. On a snowy Friday in January, I found myself for the first hour the only student with two tutors, but gradually others appeared and I got to know a friendly group of experienced quilters. As the only beginner in this slot throughout the year, I was working at my own pace through a well-thought out programme of increasingly complex block designs and techniques. Gradually some of the terms which had baffled me at Cambridge Quilters’ meetings such as needle-turned applique and foundation piecing became clear.

So, choosing fabrics and getting used to some exacting standards (having my ¼ inch seams measured and being told my points weren’t pointy enough), by the summer I had about twenty 6 inch blocks and the problem/opportunity of trying to turn them into a coherent quilt design. At this point I was offered lots of advice and was strongly advised that I need sashing in a contrasting colour to ‘lift’ the quilt so I chose one to tone in with the highlight pink/orange colours which had started to appear in some of the blocks as I was getting more confident.

I wanted a centre piece and my Ohio star surrounded by two co-ordinating flying geese and my last block, the cactus flower, had potential. So, just when I thought I’d finished making blocks, I needed two more flying geese (a quick job) and three more cactus flowers (good for my foundation piecing practice). And at this point the ex-maths teacher in me came out: I worked out the measurements for two rectangular sets of flying geese to make the centre piece fit with the other rows of blocks.

So the quilt came together. And the sashing which I’d liked so much was suddenly too much. So some weeks making a ‘piano key’ border followed, to tone down the sashing and use up most of the rest of the fabric I had bought.  The quilting is mainly ‘in the ditch’, apart from a bit of straight line quilting in the centre motif to bring the Ohio square and the flying geese together. I did a bit of hand embellishment on the folded maple leaf and friendship stars and, apart from the binding, which took longer than I thought it would, I was done.

I learnt lots about technique and colour, about how much work goes into a quilt but also how much fun you can have. I’m now working on my free-motion quilting skills and have a plan for a ‘quick’ next quilt which will major on the quilting rather than the patchwork.  Watch this space.